Don’t Be Afraid to Be Heard

Today I woke up with a strong feeling that I need to stop asking for permission.

Those words kept running through my mind as I quietly made coffee and sat in the dark living room in front of the fire.

I got out of bed early to take advantage of this quiet time while my night owls sleep in. I intended to start journaling about gratitude but was pulled to the computer to write something more. I felt the need to write something here instead.

This blog has been an interesting process. I’ve started and stopped so many times. I’ve hammered myself with questions like, “What are you writing for? Who are you to write anything? What do you have to say? And who would even want to read it? You are nothing extraordinary.”

Well, that’s true. I’m not extraordinary. And I’m nobody to write anything, I guess. I don’t know if anyone other than a handful of people will ever read my writing and connect with my words. But today, it finally, finally sunk in: It doesn’t matter.

Today, as I grappled with the internal argument between what I write and what anyone who reads it thinks, a little voice said: “Write for you.”

The voice I’m referring to shows up pretty frequently. Out of nowhere, answering my racing thoughts. It comes in quietly, but distinctly. From within, but separate.

The voice said, “Write for yourself.” And then the knowing part of me that is the instinctive response to the voice said, “Don’t try to write the things you think people want to hear.”

I think that simply means that it’s time for me to just write the things I want to write and let go of worrying about people. It’s not just the questions above that I mentioned, but also the questions of “What will they think of me when the read the thoughts I have or the stories I’m telling?”

I don’t have the answer to that question, because I haven’t really jumped in to write the things I want to write. But I know the call is not going away.

In 20 plus years, it hasn’t gone away. It’s only become stronger. And really, what I’m finally accepting, is that other people’s opinions of me or what I write do not matter.

That’s a hard one for me. I grew up in a world where what people thought of you mattered. It was everything. It defined you. It was the basis for what you said, did, thought, and even wore on your body.

It’s a very hard habit to break. Actually, it’s not even a habit. It’s a solid way of life for some people. It was for me.

So today, I am declaring this:

Moving forward, I will write for me. This process, this blog, is my creative space. It’s where I will share my feelings and thoughts and stories as I see fit, without “editing for approval.” I am done with approval-seeking and writing what I think should be written rather than what I want to write.

My stories are important to me, and that’s really all that matters. I must stop asking for permission and seeking approval before moving forward. I’m so tired of that game.

If my words eventually find a tribe or resonate with even one person, that would be fantastic. But my first priority is to just get the damn words down. Because getting the words down feels so damn good.

It may be about a recipe or it may be something I learned from a situation. But it’s here that I will write whatever I feel moved to write. The boring stuff. The cheesy stuff. The messy stuff and possibly the unpopular stuff.

Last week I went to yoga. When the instructor told us to breathe out loudly, she said: “Don’t be afraid to be heard.” She meant to let the breath out big. Don’t hold it in. Don’t be quiet about it.

The thing about yoga is that I always walk way with a beautiful nugget of wisdom that is relevant to whatever is going on in my life. I don’t write as much about what I want to write is because I’m afraid to be heard. There is much I want to write about but I’m not sure how it will be perceived and so, therefore, I stay quiet.

I used to think that if I was going to write this blog, it had to “serve a purpose.” But I thought the purpose had to be about serving others. I hope it does. I really do. But the first purpose it must serve is to let me show up and throw up. That’s right. They may be the crappiest and most boring words I’ve written. But I have to allow that process to unfold and this blog is the vehicle for the unfolding.

There is a second purpose too, and that is to create something for my daughter. I want her to know my stories. Someday, I want her to be able to see me now from her adult lens. I want to write so she can have something to look back on. So she can know me even more.

When I was 20, I bought my grandma a little book from the Hallmark store. It was titled “The Story of My Life.” Each page had a little prompt/question about some aspect of life and some lines for you to jot down the answers. I was so interested in Granny’s stories. Occasionally, during my visits, I would ask “Have you written in your book?” She would always answer, I’ll work on it.

As I write this, she’s two months shy of 93 and she wrote on one page. Dementia has taken hold, and she couldn’t tell me what she had for breakfast this morning, much less any memories. When she goes, her stories will go with her. It makes me incredibly sad. I wanted those stories to know her more and to better understand my family.

So here, I will write the stories. Mundane, crazy, honest, uncomfortable, raw, even bland and boring. All of my words have a home here because I don’t want my stories to die with me.

If you are reading this, my challenge for you is this: Whatever is calling you, do it. Stop asking for permission. 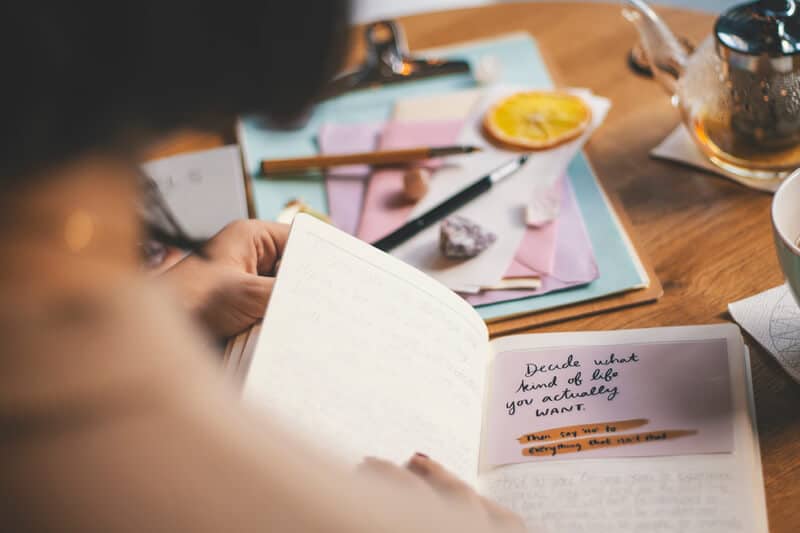 When Things Fall Apart: How to Have a Positive Mindset

Feeling Happier After 40 – How to Embrace Midlife